A lonesome and solitary “ting” from a bicycle bell announces the arrival of the Blacking Man. Cycling slowly and forlornly along the back streets of Chiang Mai in Northern Thailand these wiry old men, dressed entirely in black from head to toe, look like they are escaping their own funeral.

Chiang Mai is an amazing place and it’s changing rapidly. Even in the few years that I’ve been here I have gone from making special journeys to find shops that sell milk, to having a bewildering choice of massive high tech shopping malls that sell everything; sun dried tomatoes, fridge magnets, roasted red pepper hummus, lemon sorbet, organic nachos…you name it we’ve got it. As all Global Finance undergraduates will know, the arrival of Belgium fruit beer on our supermarket shelves is an important economic indicator, and we’ve got 5 flavours. BOOM.

And yet, with all this high octane super development and cash fuelled mania to become a sophisticated, high tech, wine swilling nation, the old Blacking Men struggle on in a parallel universe where a week’s hard won wages would be just enough to afford a cheap bottle of Cabernet Sauvignon. 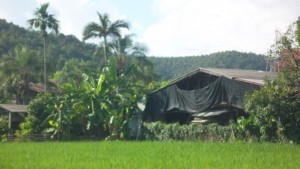 Back Lanes of Chiang Mai

Right now Chiang Mai is a place of stark contrasts, where the ultra modern and ancient rub along together; where bare footed saffron robed monks collect alms at 6 o clock every morning from upmarket wine bars and high performance car showrooms.

The Blacking Men, along with the travelling knife grinder, the itinerant glass cutter with his little wooden box of off cuts, the tree top spear fishermen and the old lumberjack guy who cycles around announcing his services with a battered old chainsaw tied onto the back of his bicycle with a piece of string, all stand firm in the face of relentless change.

I thought of these old street tradesmen recently when I saw an advert for something called Resilience Training held over a long weekend at a counselling retreat centre in Tuscany. I thought of these hard old wiry men cycling around the back lanes and country roads of Thailand and wondered what they would make of the three days.

I wondered whether they would understand resilience in the same way that you or I might, or whether they would see it as indistinguishable from life itself. To live a week in these men’s shoes would probably teach you all you need to know about resilience. It would certainly be a lot cheaper with much less psycho-babble and you would also have the opportunity of acquiring some interesting if somewhat antiquated street trade skills.

The first time I saw a Blacking Man was on an isolated country lane way out of town towards the mountains. He was slowly cycling along; his bike as ancient and black as he was. He was wearing a black hat, black shirt, tattered torn black trousers and old black leather boots. As he cycled he occasionally “tinged” his little bicycle bell. I sped past him and watched this tiny black figure disappear to nothing in my rear view mirror.

A year or so later I was asked to do some counselling work at a local school. This meant I had to be on the road quite early for the beginning of the school day at 7.30am. It was out of the early morning gloom that I saw my Blacking Man again, looking a bit older, a bit more tattered but still steadily and forlornly peddling along tinging his little bicycle bell.

I pulled up next to him. Lashed to the rear of his bike sat a tiny clay charcoal fire pot on which was strapped a filthy tin pan of bubbling black liquid.

The Blacking Men come from a time which my grandmother would have referred to as “make do and mend,” where nothing is thrown away, where everything is “reduced, reused and recycled,” not for any lofty environmental reasons, but through bleak necessity.

For an infinitesimally small sum of money you can, this very day, listen out for the tell tale ting and flag down your local Blacking Man and dye your old faded clothes black; 5 Baht for a shirt and 10 Baht for trousers. Just like new, as long as you don’t mind all your clothes being black.

Despite the shiny opulence and the empty promises, the desperate consumerism and gaudy pleasures of the shopping malls, Chiang Mai is still a thrifty little community where the make do and mend mentality still rules. And I bet that when everyone has bought all the mozzarella cheese and drunk all the Australian Cabernet Shiraz, and fruit beer and the whole glittering consumer circus moves on, the Blacking Men will still be cycling and re-cycling around the lanes and country roads helping people to turn old stuff into new.

So, next time you are feeling like giving in and giving up and throwing the whole sorry mess in the bin, remember the Blacking Men and how they turn old worn out and faded clothes into a shirt and trousers fit for a king. Surely all of life’s challenges are a matter of perspective, a matter of resilience…and a little bit of magic black dye.

Hope you enjoy these Life Change Blog articles, please pass them around and leave a comment below.

For more information about Chiang Mai and the Blacking Men or indeed our Life Changing Holidays just send us an email below.