Have you ever seen a coffin being made? No, I hadn’t either until we moved to Chiang Mai, where they make them on the street. In fact, around the western side of the old town there’s a coffin shop that displays new coffins as though they are the latest must have household items, like a new washing machine or dish washer. I’ve actually got my eye on a rather nice red wood stain model that looks like its price has been reduced, and what’s more, they do easy terms! That’s my kind of coffin shop. 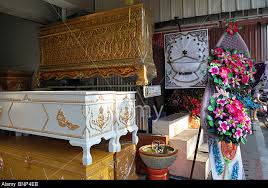 Back in England I have no idea where coffins come from. No idea at all. For all I know they could be flown in from Jupiter, or imported in bulk from Romania. I have never met anyone who makes coffins or who knows anyone else who makes coffins. I have never seen them being transported, or advertised or delivered anywhere. The whole coffin industry, much like the whole business that surrounds death itself is shrouded in secrecy and discreetly hidden from view. It’s like a huge conspiracy that we all join in with to pretend that death doesn’t happen.

By comparison, in Chiang Mai, I not only know where they make coffins, but where the guys who make them go for lunch (a little noodle shop next door to their ramshackle street side workshop). They seem a cheerful bunch, smoking and banging and hammering their lives away at the side the road.

There is something very comforting about the blasé way that death and its associated accoutrements are dealt with in Thailand. Nothing is swept under the carpet, there’s no attempt to shield us from the inevitable end, coffins are not hidden around the back of undertaker’s yards, but made right in front of you on the pavement and displayed with money off vouchers and easy terms.

If you had the inclination I’m sure they would make you a custom casket while you waited, why not. I’m not entirely sure it would even be that unusual here.

The familiarity of seeing coffins being assembled and the cheerful, every day attitude of the coffin makers, makes me a little easier with the idea death. It also puts things in perspective for me when I scoot past on my motor scooter and look at the guys banging nails into a coffin and wonder who will be lying there. At the same time, I can’t help but acknowledge, in a far flung dark corner of my mind that one day it will be me. And, suddenly as if by magic, my petty worries, and day to day stresses, seem to evaporate very quickly indeed. It’s like having an automatic daily dose of Existential Psychotherapy, a whole 12 week course condensed into one fleeting moment. I might even go out and put a down payment on that red wood stained casket and then go and treat myself to sausage and sticky rice.

If you would like to come and have a look at the street side coffin makers of Chiang Mai do let us know when you book your life change holiday. We’ll throw in a free trip for you, as well as the instant dose of Existential Psychotherapy!