Just to the south of Chiang Mai is a beautiful little “body burning place” set into a wooded hillside. Just to be clear from the off, “a body burning place” is a place where bodies are cremated. There is a central open sided pagoda where the bodies are burnt, and enough sheltered seating for about 200 people. If you didn’t know what it was you might be forgiven for thinking it was some kind of ornamental barbecue and picnic area.
Next to the body burning place is a small tumble down block built shack where the guy lives who burns the bodies. That’s his job; he’s a professional body burner. In a country where there are no high-tech crematoriums this is a skilled, not to mention, rather bizarre and unusual job. It’s a job that I imagine is also rather sobering.

It must certainly put life’s minor ups and downs into perspective when on a regular basis you have to burn a human. These aren’t words that sit comfortably together. Burn a human. It just doesn’t sound right does it, let alone form the central feature of a job description. 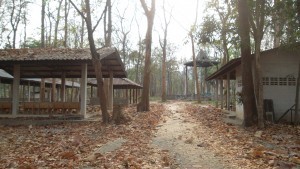 The body burning guy works odd hours depending I guess upon the death rate. I wonder if he keeps an eye on the frail and weak and tries to work out his busy periods. It can’t be very easy to organise holidays. He’d have to keep back an emergency pile of wood and kindling just in case there was a last minute rush job.

I see the body burning guy quite a lot as his little shack is on a cycle route that I take out to a far flung village market that sells the best wild honey in the world. He sees me trundle by and nods in my direction and I nod back. He’s often outside chopping wood, its purpose, bearing in mind his occupation, is only too clear, not to mention slightly sinister.

As I cycle by I wonder to myself whether he thinks about who the wood will be burning. Whether he needs more for a fat person or less, whether he only uses wood or chucks a box of charcoal in, or a few old tires, and whether, like me when I had to light a barbecue in the rain, he has to use a whole box of fire-lighters to get the bloody thing started. It feels like the most macabre yet painfully practical work in the world. Can you think of a job that is more essential and more gruesome?

I’m also struck by his isolation. He’s not part of a jolly team that make the best of difficult work, he doesn’t, I assume, have access to stress counselling or any kind of emotional supervision. He’s just got an axe, a huge pile of wood and never ending silent procession of dead bodies which he has to reduce to ash. His job satisfaction must read like a serial killers wish list.

Outside his shack, on a little table at the side of the road, he sometimes sells small packets of steamed ground-nuts (a popular snack round these parts). I buy them for 10 Baht a bag and wonder if he uses the ash from the body burnings to fertilise his vegetable patch. Probably, I guess, I would. He’s got enough of it.

I was cycling past his shack recently and saw him pottering about and I wondered what he makes of his job. Does he like it? Does he dream of doing something else? I thought about all the people who have talked to me about their feelings of being in the wrong job, or to quote a popular phrase “feeling like I am living someone else’s life.”

As I cycled along munching on my gritty ground-nuts I wondered whether the body burning guy feels the same way. I wondered whether he talks things over with his family (if he has any) or friends (if he has any). I wondered if he sees what he is doing as directly useful to humankind, or whether he feels the opposite. After all, if he were left alone with the rest of humanity it would surely just be a matter of time before we were all reduced to one massive pile of ash and he found himself presiding over the juiciest but grittiest ground-nuts in the world.

I think that spending a week working alongside the body burning guy would be incredibly therapeutic (for us I mean, not him. He’d probably be quite alarmed at our arrival I guess). It would make us think wouldn’t it. It would put things into perspective for us. At the very least we would realise rather sharply that it’s just a matter of time before it’s our turn to be flung on the fire; that if we need to make important life changes there is little point in waiting, that we don’t actually have that long to make a difference, and that as it’s an incredibly sunny and lovely afternoon I’m going to stop writing and play football with my youngest son before he gets too old to want to play with his Dad.

Hope you enjoy The Life Change Blog, feel free to comment below, till next week.