The other evening the lights went out in the market and the whole place was lit up by a million candles. It was one of the most beautiful things I have ever seen.

I had been talking to a Counseling Retreat guest and had been keeping half a watchful eye on the clouds that were gathering over the mountains in the distance. 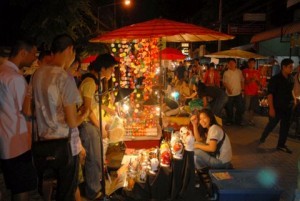 Lights at The Market

At this time of year in Northern Thailand you get the most amazing electrical storms. The phrase “most amazing electrical storms” doesn’t really do justice to the incredible earth shattering display of shear power that previously I had only seen on the telly. It really justifies the word awesome. The heavens rip apart with a force last witnessed when my sister smashed my bedroom door down after I had cut a zigzag pattern in the mane of her Barbie horse. I thought it looked rather cool.

But of course for people who live here it is just another normal day. It’s just a bit of thunder and some lightening. The only occasional problem is that the lights go off in the market for an hour or two, and when they do we are treated to one of the seven wonders of the modern world.

After the initial whoop of delight the traders who are used to this, start lighting their stalls with small orange candles. They are not much bigger than the sort that you put atop birthday cakes and are used here to decorate the numerous Buddhist shrines that you will find in every shop, house, hotel, in fact anywhere that a person feels warrants a shrine, which is almost everywhere.

Within moments the market looks like the inside of Aladdin’s cave. Thousands of twinkling orange candles illuminate the great piles of Dragon fruit, and massive bright green bundles of coriander and all the other wondrous bounty that the market holds, and believe me, it holds a lot. The whole market twinkles and glows like the final magical scene of a Walt Disney fairy tale. It has to be seen to be believed. It really is incredible.

Don’t Miss The Market Tour On Your Counseling Retreat

Whichever Life Change Holiday you take, please don’t forget to book a tasting tour of local markets. It is a life changing event in itself, it really is.

Our Counseling Retreat Holiday manager Khun Sonthaya will take you to a selection of his favourite markets, and treat you to a selection of his favourite foods. He’ll show you all the regional specialities like the spicy sausage and the miniature Thai fruits made from bean paste and the steamed fish curry parcels and of course, mango and sticky rice with a liberal sprinkling of condensed milk.

If you are really into food, you might like to take a half day cooking class at our Counseling Retreat Cooking School. Again, I would highly recommend it. It includes a trip to another out of town local market where you will be shown what ingredients to buy before returning to the open air kitchen which looks out over the rice fields and palm groves. It really is idyllic.

You will have a choice of what to cook, but I would go with the Green Chicken Curry. I could never get it quite right until I was shown the secret ingredients. If you like food, and eating and cooking you’ll love it here.