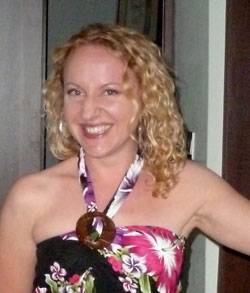 My name is Emese and I am an emergency response specialist in the humanitarian sector.

I still remember the day I decided to go to Thailand for a Life Coaching Holiday, and how it felt like such a leap into the dark as I’d never tried any coaching or counselling, or anything like this before.

A few years ago I had a crisis at work which rattled my confidence very badly. I was just a few months in to a new role which was essentially my dream job, when I was put into a very difficult managerial situation. I couldn’t really turn it down. My boss failed to back me up, leaving me feeling totally undermined in my first managerial position. For months after I panicked, I thought of going freelance but was really just spinning in circles of self-doubt as a result of these events.

I remember arriving in Chiang Mai and feeling exhausted and crushed. From the first day when I met Chrissy I felt like I could pour my heart out, talk about all the ups and downs and not feel afraid of sounding like I didn’t know my own mind. When I looked at my personality profile, I saw myself very clearly; but the way that Alex explained it made me feel very comfortable that I was not being ‘put in a box’, I was just being supported in understanding myself better.

My First Week In Thailand

Trying to reflect on what I learnt about myself in that week is very challenging, partly because I learned so much, but also partly because what I learnt has now become almost ‘core truths’ inside myself. But in terms of how I learnt it, so much seems to come down to communication for me. Chrissy has an amazing ability to hear not only the story that you are telling, but also the way you are telling it – the words which you select, the significant pauses—and to help you to unpack what is lurking below which you might not have even realised. Facilitated soul unpacking describes it well for me!

After just a week, I figured out how I felt about what had happened, and took steps to confidently communicate that to others. A weight was lifted from my shoulders, and I was ready to put faith in myself and go freelance.

It’s two years on now, and things are going from strength to strength. I’ve undertaken contracts for NGOs, the UN and for the Red Cross. I’ve worked in a number of countries, including Haiti, Bangladesh, Cambodia, Malaysia and Indonesia.

I Got The Job

The ultimate success for me was the result of a very tough interview for my current job. I was asked to talk about a difficult emergency situation which I had been in and then asked how I coped. I told them that I took myself off for a Life Change Holiday to sort it through in my head…and guess what, I got the job. I learnt afterwards that this was one of the things which ‘sealed the deal’ on them recruiting me.

My first time in Chaing Mai was so productive that I decided to go back again this year, in February. It was like being back with family! I was delighted to already see at the start of the week that my ‘happiness’ scale had increased by 2 out of 10 since the last time I was there. Knowing what to expect, and being in a much better head space than previously I was really able to suck the most out of it. Not only was I figuring out a few more things, but I was also enjoying the gorgeous and serene Puripunn Hotel, and the wonderful company of Khun Son whilst I took wonderful trips in the area.

Since then, I have succeeded in part of my second life change plan, to leave the UK behind and move to Kenya. I’m doing a job which I love, which is giving me amazing opportunities to constantly take steps beyond the level at which I was working before, whilst at the same time offering me loads of support and back-up whenever I need it. And most importantly, I don’t feel like I need to get things right all of the time. If you allow yourself the forgiveness to be wrong without kicking yourself over it, you give yourself the chance to adapt, learn and evolve.

Chrissy, Alex, Luke and Khun Son, I thank you from the bottom of my heart. It’s more than just a job to you all—you invest so much of yourselves in the people you work with, and it shines through in all that you do. I will always see my choice to come visit you as a pivotal decision from which so much good has come, and which has helped me to strive to take the most happiness out of life that I possible can!